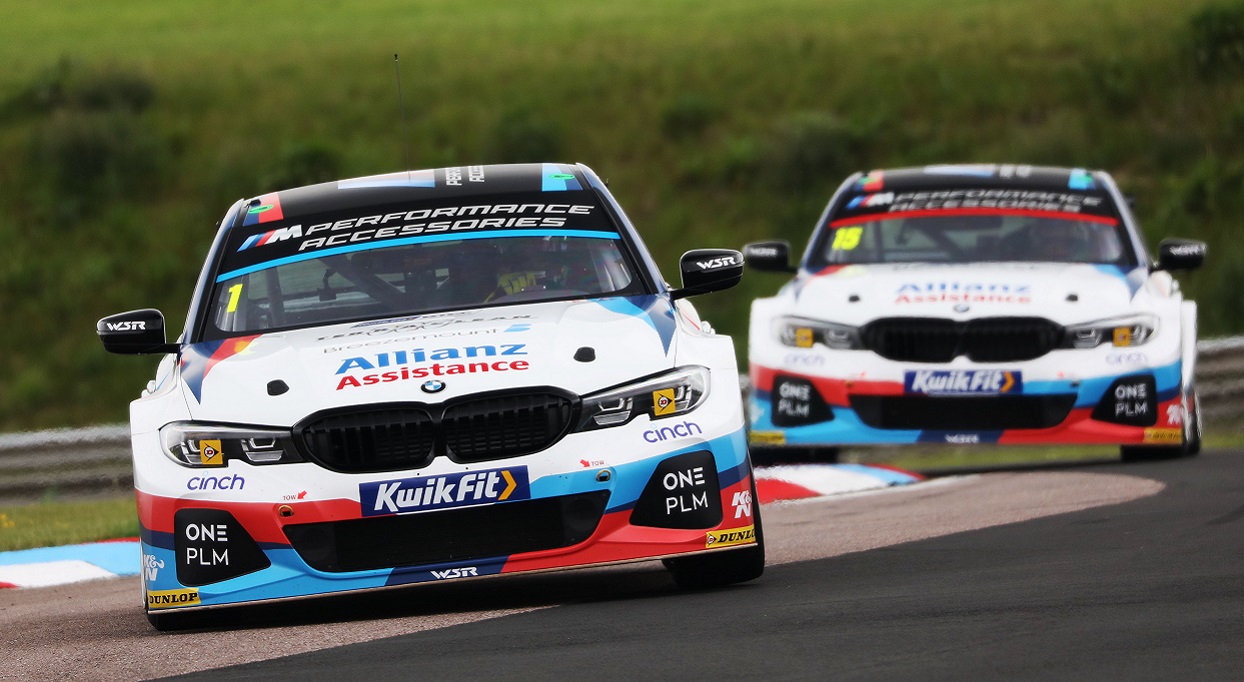 BMW Pirtek Racing’s Andrew Jordan remains solidly in the hunt for the British Touring Car Championship after three hard-fought points finishes in a chaotic series of races and wet conditions at Silverstone.

The 2013 champion, who is seeking a second title in his West Surrey racing (WSR)-run BMW 330i M Sport, twice finished eighth and added a 10th-place result on a day when rain and some bizarre on-track incidents added to the drama.

His results helped to increase BMW’s advantage at the head of the Manufacturers’ Championship and leaves him 17 points away from series leader Colin Turkington – whose Team BMW car is also run by WSR – with 67 available at the season finale. Andrew took advantage of multiple incidents to climb from 14th to 10th in Race One, his choice to use the soft-option Dunlop tyres in that race aiding his climb, despite his BMW being weighed down by 48kg success ballast. Switching from slick tyres to wet rubber when the rain began to intensify in Race 3, he fell outside the top 20, but climbed to eighth by the chequered flag. Three races remain of the 2019 season with Andrew in a five-way fight for the title, which will be decided at Brands Hatch on October 12-13.

Andrew Jordan said: “It’s been an up-and-down weekend. When the weather does this and throws you into uncertainty over set-up just before the start of a race, you can easily throw away huge amounts of points with a small mistake. We didn’t do that, only lost five points to Colin and now we can regroup and go for it again at Brands Hatch.”

A battling second-place finish helped Colin Turkington increase his British Touring Car Championship advantage on a chaotic day of racing at Silverstone. The Northern Irishman staged a remarkable fightback from 14th on the Race-Two grid in his WSR-run BMW 330i M Sport to carve through the field and record his eighth podium finish of the year in a race that was cut short of its intended distance due to the onset of rain. More rain followed in the early stages of Race Three; Colin pitting for wet tyres during a safety-car period and emerging in 25th spot; from which he rebounded magnificently to finish seventh. His results mean he leaves Silverstone with a 16-point advantage over his nearest rival in the championship; five more than he began the day with.

Colin Turkington said: “I’m very pleased to leave with a bigger lead than I came here with. When you get hit with this kind of variable weather, you know anything can happen, but we worked extremely hard together as a team to try and make sure we had what we needed to just keep getting the results. It’s going to be a very interesting finale.”

Team-mate Tom Oliphant; the fastest Team BMW driver in qualifying, started the opening race from fifth spot and finished there too after a strong drive. Despite carrying 30kg success ballast into Race Two, the Leamington Spa-based driver made storming progress and fought his way up to the lead by half-distance, at which point the appearance of the safety car reduced his advantage to nothing.

In unfavourable conditions, Tom finished the race in seventh and then put on one of the drives of his career after electing to pit for wet tyres when the rain fell in Race Three. Falling to 21st as a result, he battled back to fourth place.

Not only was Tom the third-highest points-scorer of the weekend, he was also the leading Jack Sears Trophy competitor in each of the three races, meaning he was awarded the trophy for the round on the end-of-day podium. With four consecutive maximum scores to his name, he is now just 10 points away from the JST lead with 60 points up for grabs at the season finale.

He said: “It’s been a very strong race day, and a very strong weekend. We’ve had a quick car in all conditions and scored a lot of points. I was disappointed not to get the win in Race Two. I’d made it to the front and then the conditions got a lot worse during the safety car, so I thought there was a chance it might get red-flagged at that point. It didn’t happen and on the hard tyre in those conditions, I just had to concentrate on keeping the car on the road. But there was the added bonus of winning the Jack Sears Trophy in all three races, so that championship is all to play for at Brands Hatch now.”

Dick Bennetts, Team Principal, said: “We knew today was going to be tough, but actually nobody in the title fight has really had a huge points total this weekend, so it’s been a great effort from everybody in difficult conditions to be the top-scoring team here. Colin’s a class act and he showed that on-track today in all three races and Tom’s been consistently one of the fastest drivers in all conditions. We’ve extended BMW’s lead in the Manufacturers’ Championship and closed in on the Teams’ Championship lead too, so I’m pleased with the effort everyone’s made. Now to do it all again at Brands Hatch and hopefully come away with the championship.”

The combined efforts of Colin and Tom made Team BMW the top-scoring team of the weekend to significantly close on the lead of the Teams’ Championship. They are just 20 points away from the top spot with 111 available at Brands Hatch on 12-13 October 2019.

Physical Digital is a proud Technical Partner of WSR, supporting them with 3D Scanning, reverse engineering and quality inspection requirements.